Little is recorded of the activities of Aborigines in the area of Trigg Bushland prior to European settlement. The traditional pattern was for Aborigines to visit coastal areas in summer after spending winter inland.

The soils in the area are low in nutrients, so the land was not attractive to early settlers. However, the area was exploited from the 1850’s onwards for timber-cutting and grazing. By the 1890’s the area was part of a sheep and cattle reserve that extended inland from Trigg Beach and then northwards to Star Swamp, the southern end of the Old North Road (Geraldton – Perth stock route). In 1896 the cattle reserve included a quarantine area for camels imported to cart water to the Goldfields.

For many years the reserve supported emus, kangaroos, possums and other native animals as well as brumbies, foxes, rabbits and probably cattle from the nearest dairies. With better road access in the 1930’s, holiday and fishing shacks sprang up on the coast. Suburban development reached present limits in the 1970’s. Controversy surrounded the building of a major road through the reserve in 1986, the present-day link between Marmion Avenue and West Coast Highway. 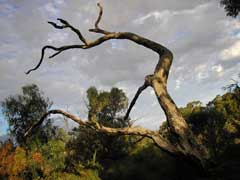 Trigg Bushland is now one of the sites designated as ‘Bush Forever’ by the Government of Western Australia, and has now been designated a reference site by the Perth Region Plant Biodiversity Project.

Sites are selected which best represent major landform, soil types, vegetation and floristic types, and threatened ecological communities, and detailed information about them are available for public education about Perth’s unique plant communities across the Swan coastal Plain.

FURTHER INFO: A History of the Protection of South Trigg Beach Reserve