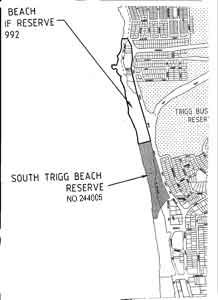 THE HISTORY OF THE CONSERVATION OF SOUTH TRIGG RESERVE

The Trigg Bushland was known as the Trigg Regional Open Space in 1981 when it was identified by the System 6 Study Report to the Environmental Protection Authority as "having conservation significance due to the rarity of reserved areas within the metropolitan area which provide an example of a belt of native vegetation extending from the sea to tuart and banksia woodland."

The Trigg Regional Open Space in 1981 included the reserve areas which now make up the Trigg Bushland and part of the beach or coastal reserve between South Trigg Beach and Scarborough Beach. However, when the Trigg Bushland was designated as a Class "A" Reserve in 1989 (following its dissection as a result of the extension of Marmion Avenue) it did not include the beach reserve.

The Friends of Trigg Bushland continued to lobby for the coastal dunes to be given the same protection as the larger Trigg Bushland Reserve. We were aware that this area, squeezed between two of Perth 's most popular beaches, was at risk of development for car parks, footpaths, recreational and commercial uses. As a result, in 1997 the Friends group presented a petition to the City of Stirling calling for it to take immediate steps to recommend to the State Government that the coastal reserve be upgraded to Class "A" to ensure its protection. The City instead approved a conservation/landscape protection covenant over the coastal reserve. This covenant recognized the coastal reserve as a "natural western extension of the Trigg Bushland Reserve" (October 1997).

The covenant was a positive step but the Friends of Trigg Bushland did not regard it as providing sufficient long term protection for the coastal reserve and lobbied the State Government to have the reserve classification upgraded.

The Minister was supportive of protecting the dune reserve and upgrading its classification. In 1998, the City made application for the South Trigg Beach reserve to be reclassified from "C" to "A" Class Reserve. The reserve, which is about 1 km long and covers approximately 10 ha was finally made a Class "A" Reserve (No 244005) in 2001 and remained vested in the City of Stirling for conservation and recreation purposes.

In 1998 the "Trigg Bushland and Adjacent Coastal Reserve" was recognized in Perth's Bushplan as being of regional environmental significance. Bushplan has subsequently become Bush Forever and the Trigg Bushland has been designated a Bush Forever Reference Site under the WA Local Government Association's Perth Biodiversity Project. The coastal reserve is a highly valued and precious natural area worthy of protection due to its association (flora, fauna and landform) with the Trigg Bushland Reserve. It represents an increasingly rare example of successional vegetation development from the beach, through mobile and stable sand dune systems to tuart/banksia woodlands. It is important to our local natural heritage and we have a responsibility to current and future generations to keep it intact and protected.

The most recent threat to the integrity of the coastal reserve was a proposal in 2005 to build a 700 metre long boardwalk through the sand dunes between Scarborough and Trigg Beaches for the Australian Surf Life Saving Championships. Fortunately, public submissions were overwhelmingly opposed to the boardwalk proposal and it was eventually rejected by the City of Stirling. However, it illustrated that despite the highest protection currently available, development proposals can still be considered because the Class "A" classification allows the reserve to be used for conservation, education and recreation purposes.

Website development funded by a Department of Environment and Conservation Community Grant for Tuart Conservation and Management. Text and images copyright Friends of Trigg Bushland Inc except as otherwise noted. Website design by Nina McLaren and Peter Peacock 2008