The reserve’s unique progression of vegetation types becomes apparent if you start near the coast at the south-west corner of the reserve and walk inland. Away from the spinifex and other colonisers of the fore dunes are low heaths featuring fan flowers (Scaevola crassifolia) and, with their pale grey-blue leaves, coast daisy-bush (Olearia axillaris).

Further in are groves of Rottnest cypress (Callitris preissii). It is thought that thick forests of cypress were formerly quite common along the coastal strip of the Swan Coastal Plain. The susceptibility of cypress to fire and the practice of burning the bush may have reduced its distribution, but the effects of European settlement have had most impact. This is one of the last places in Perth where natural groves of Rottnest cypress are still found. (More information on Callitris preissii.) 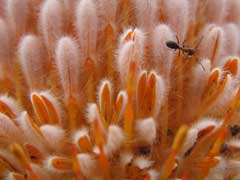 The eastern section of the reserve is mostly an open woodland of tuart and acorn banksia (Banksia prionotes) with an understorey that includes one-sided bottlebrush (Calothamnus quadrifidus) and dune moses (Acacia lasiocarpa).

Other significant species, and uncommon in the metropolitan area, are dune sheoak (Allocasuarina lehmanniana) and corkybark (Gyrostemon ramulosus). Corkybark is usually a tree of the dry inland.

The northern section of the reserve is a woodland of tuart, marri, jarrah and banksia with a diverse understorey of balga (grasstree), zamia, and species of peas, wattles and orchids. 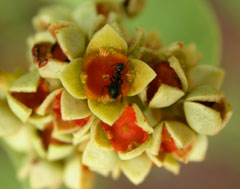 Like the banksias, parrotbush (Dryandra sessilis) is very attractive to honeyeaters. Both parrotbush and quandong (Santalum acuminatum), with its conspicuous red fruits, occur where limestone is near the surface.

Tuart has suffered throughout the reserve from too frequent fires, ecological imbalances (not enough cockatoos or parasitic wasps to control the tuart longicorn beetle) and canker fungi. However, in parts of the reserve, tuart shows good signs of recovery.

What’s blooming – notes on what you can find in the bushland right now. Who’s been eating that honky nut? See Cockatoo Care’s chart – link. 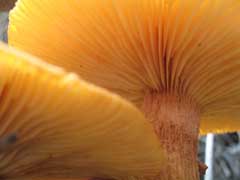 The first ever survey of Trigg Bushland was undertaken by the Perth Urban Bushland Fungi Project in 2006.