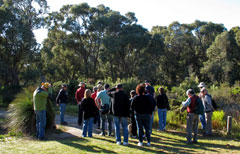 It was a lovely sunny morning when we took our quarterly walk through Trigg Bushland on 29th September. For a change, we walked through the Duart Arnott part of Trigg Bushland - the part that is north of Karrinyup Road. Once again we were ably led by naturalist and member David Pike. 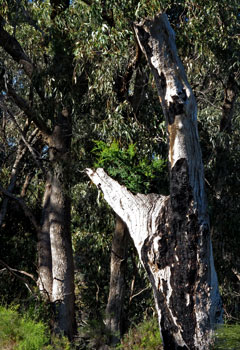 Phylis spotted the first unusual sight - the world's tallest Prickly Moses - actually growing in the crevice of a dead tree! While there aren't many dead trees in the Duart Arnott part of Trigg Bushland, we expect more as the old 'mother trees' continue to age and no longer can withstand fire. Too frequent fires also cause the seedlings to die off, as they can't survive a fire until they are 10 - 15 years old - and even then, while they might survive, they are likely to become multi-trunked trees rather than tall, grand specimens. See our tuart survey results for more information about the health of tuart trees in this part of Trigg Bushland.

Logania vaginalis is a less frequently seen plant, usually only in Duart Arnott rather than the rest of Trigg Bushland. Also known as 'White Spray', it is found from Cape Arid along the coast to Geraldton. We haven't seen this flower for years, so it was a very welcome surprise! 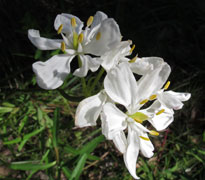 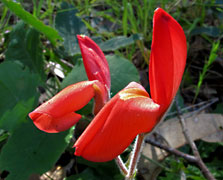 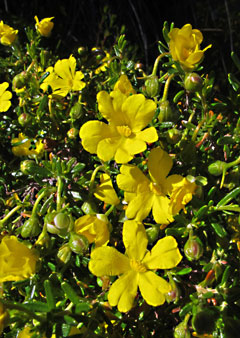 There are some orchids, but far fewer than in previous years. Spider orchids in particular seem to be in decline. There is much evidence of orchids being trampled by people and dogs walking off the main limestone paths. There is also occasional evidence of orchids being picked or dug up. These orchids will probably never recover. Orchids are particularly prone to being picked (which is illegal). While this may not kill the plant, it does affect the plant's ability to set seed, which in turn affects recruitment. Soil compaction through establishment of tracks from walking can also have negative effects on regeneration potential (Patten et al. 2008; WA DEC 2007).

For more pictures, see next page.

Website development funded by a Department of Environment and Conservation Community Grant for Tuart Conservation and Management. Text and images copyright Friends of Trigg Bushland Inc except as otherwise noted. Website design by Nina McLaren and Peter Peacock 2008